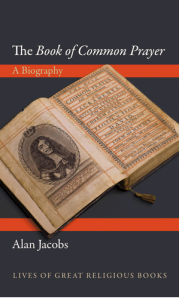 Alan Jacobs, a professor of humanities at Baylor University, has written a beautiful and wise book about The Book of Common Prayer and its many iterations since it’s initial publication by Thomas Cranmer in 1549. It is both a feat of compression, bringing 500 years of history into the scope of some 230 pages, and of scholarship, gracefully knitting together several course strands of literary, liturgical, and ecclesiastical history. And yet somehow Jacobs maintains an effortlessness, a gracefulness of style, that is rare in academia.

Two passages highlight Jacob’s loving yet firm grasp of his subject. The first is his fine description of the language of the prayerbook:

The “soberly magnificent prose” [historian Eamon Duffy’s phrase] of the prayer book remains its single most striking feature. It is highly rhythmical and consistently reliant on Latinate structures, but it borrows from biblical Hebrew a deep allegiance to parallelism. Some of Cranmer’s most memorable phrases involve doublings, often alliterative: . . . the twin alliterations of “make speed to save us” and “make haste to help us,” but there are many more, and almost every imaginable way to present parallel clauses either for reinforcement or for contrast. . . .

Almost every page of the Book of Common Prayer contains just such a miniature textbook of rhetorical effects, typically executed with virtuosity. It was C. S. Lewis’s belief that the virtuosity arises from the need to adopt Latin devotional language to the very different character of English: Latin translated over-literally tends to be precious and pompous, and Cranmer was determined to avoid those traps. The Latin originals were “almost over-ripe in their artistry”; the English of the prayer book “arrests them, binds them in strong syllables, strengthens them even by limitations, as they in return erect and transfigure it. Out of that conflict the perfection springs.” It is especially instructive, then, to study Cranmer’s sources in order to see how he adds to or deviates from them in order to produce these effects, almost all of which take on a greater power when said aloud, and still more when said aloud by a whole congregation. (pages 61-63)

The second passage comes in his account of the reception of the revised General Confession in the 1979 American Book of Common Prayer, which replaced the older form in the 1928 American prayer book:

This [language] is certainly penitent, but in the eyes of many traditionalists only moderately so. “We have not loved you with our whole heart” could be read as “We’re not perfect, but we’re not so bad,” a construal that can hardly be placed on “We acknowledge and bewail our manifold sins and wickedness.” To be “truly sorry” is one thing: to be “heartily sorry for these our misdoings” and to go on to say that “the remembrance of them is grievous unto us; the burden of them intolerable”—that, traditionalists argue, is something else altogether.

Now, a strong and thoroughly orthodox justification can be given for these changes. Marion Hatchett, for instance, has pointed out that “in this form we confess not only our sins of commission but also those of omission and our lack of love for God and neighbor. Not only do we ask that we may walk in God’s ways, but also that we may delight in His will.” For Hatchett, the new Confession asks more from us than the old one. Others argue rather that the moderated language of the new Confession is better suited to the people of God, who come to the table as baptized Christians, having in the first part of the service already heard the Word of God, affirmed it, and exchanged the Peace with one another. On this account overwhelmingly penitential language is simply not appropriate; it is not a fast to which we trudge in sackcloth and ashes, but the “Eucharistic feast” to which we should come joyfully. But neither sort of defense convinces the traditionalists. . . . (pages 186-187)

He is that perceptive and even-handed throughout. Wonderful stuff, isn’t it?

The Book of Common Prayer: A Biography appears in the Lives of Great Religious Books series, published by Princeton University Press. Ron Hendel’s volume on the Book of Genesis, which I have read, is excellent. (I first learned of Hendel’s scholarship through Robert Alter’s translations of the Bible. His 2005 book, Remembering Abraham: Culture, Memory, and History in the Hebrew Bible, is an important but challenging book. Of interest, Hendel is the general editor of the Oxford Hebrew Bible, a monumental undertaking.)

Several other volumes have appeared to date, including Gary Wills on Augustine’s Confessions, John J. Collins on the Dead Sea Scrolls, and Mark Larrimore on the Book of Job—all of which are high on my reading list. The author-book pairings certainly seem solid if unexpected. Forthcoming volumes include Bruce Gordon on Calvin’s Institutes, George Marsden on Lewis’s Mere Christianity, and Bernard McGinn on Aquinas’s Summa. I feel a debt of gratitude to Princeton for its creation of such a richly layered feast for the mind and the soul.

One thought on “Alan Jacobs and the Book of Common Prayer”