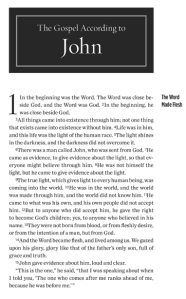 I have read several books by N. T. Wright, and I consider myself an admirer of his work, both popular and academic. So I was naturally excited when I heard that he had compiled his translations from the “New Testament for Everyone Series” (published by Westminster John Knox Press) into a single volume, entitled The Kingdom New Testament. Here’s one volume in the series, for example: Mark for Everyone.

What’s nice about this edition is its readability. The type is set more like a regular reading book in a one-column format. The numbering is unobtrusive. Unlike so many other editions of the Bible, the type here seems very well suited for reading and contemplation. No squinting or straining required!

That asset aside, I was surprised that the book contained no notes whatsoever. For manuscript variations, we are told in the introduction to “look elsewhere.” There is no explanation given for any of the choices he made along the way. There is no note to indicate if there are differences between his original translations, some of which are now more than 10 years old, and the complete translation set down here. There isn’t even a note to say which Greek text he used. Was this edition, Nestle-aland: Greek New Testament W/concise Dictionary (Greek Edition), his starting point? It would certainly be helpful to know a basic fact like that at the outset.

No other single-author translation strands the reader with his own limited awareness of the original language behind the work, not to mention its allusions, word-play, etc. All of that is submerged into a stripped down translation. But why then bother including the 39 black-and-white maps? They’re very nice, but are they all we need to understand the text?

Both E. V. Rieu (Penguin, now out of print) and classicist Richard Lattimore (The New Testament) include a handful of well-chosen notes at the back of their translations. But N. T. Wright is definitely not trying to do for the New Testament what Robert Alter has done for the Hebrew Bible (The Five Books of Moses: A Translation with Commentary or The Book of Psalms: A Translation with Commentary). And, to me, that’s disappointing, a missed opportunity.

What the decisions here really tell me is that HarperOne saw a nice, lucrative opportunity to make some money on work that had already been completed. They were not interested in building on previous work or commissioning new work. Wright undoubtedly has other popular books under contract that need to be written. So that’s probably why there is so little else on offer here. This is what publishers call repurposing, with very little value-add. I bought it, and the publisher is counting on others like me to do the same, regardless of whether or not the book is actually ever consulted or makes a lasting contribution.

The chief distinction of the book seems to be Wright’s decision to replace every mention of “Jesus Christ” with “King Jesus.” He may have good warrant for doing so, and the practice certainly does disrupt our mistaken associations with the word “Christ.” But, after a while, the effect becomes too self-conscious, too emphatic, for my liking.

Robert H. Gundry, a professor emeritus at Westmont College who has authored a translation of his own, has written a devastating and detailed critique of Wright’s literary choices in the May/June 2012 issue of Books & Culture. It is well worth reading.

All that said, Wright’s book will sit on my shelf with his other books and will, I suppose, get an occasional glance, but it will never become my go-to New Testament. An RSV or ESV Study Bible simply offers contextualizing information and textual apparatus that I require for serious study—to access a time and place (and a message!) so unlike my own.

One thought on “The Kingdom New Testament”