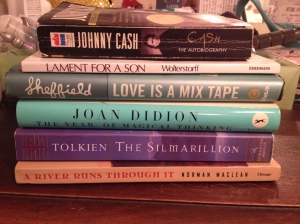 Shortly after my father died, a friend at work offered me a lovely gift, her reading list of books about mourning and fathers. She enclosed a photograph of a stack of books. To see them like this, their thoughtful designs and well-worn bindings, was a strange comfort at a time when words seemed unreal or elusive.

Her advice was “to find expression for your own grief through the words of others. . . . It can help to explore the emotions of grief and sorrow by reading other travelers who have been thrust into that same strange land and know the lay of it. Every grief is still unique, just as every love is, but these words from further up and further in can bring strength and comfort—and certainly catharsis.”

With its curious mixture of Tolkien, Johnny Cash, and Joan Didion, the list perfectly embodied my friend’s soul, her soulfulness, but it also revealed her willingness to learn from, to listen to, so many different corners of life, some more brightly lit than others.

I loved, too, how she explained her selections:

Some of these are only tangentially related to mourning: Cash by Johnny Cash has a few beautiful passages about his brother seeing angels and his mother seeing his father (even though he was not a nice man) after he died. The Silmarillion, more than anything else in Tolkien, deals with loss. Everyone keeps losing and suffering and fighting the long defeat, but there is redemption in the tears of Nienna. . . . Sheffield is about losing his young wife, but beautiful on loss and music generally. And A River Runs Through It is one of the most mature, modest memoirs I’ve ever read—and Calvinism and fly fishing and distant fathers come into it.

Just seeing the title words of Nicholas Wolterstorff’s Lament for a Son immediately brought to mind the pain of losing my brother, who died after a years’ long battle with cancer at the age of 27. I had no idea that this eminent professor at Yale, well known for several important works of philosophy, had lost a son in a tragic mountain-climbing accident. From every description, the book sounds excellent, but as a new father myself, I don’t know if I can marshal the stamina to endure that particular kind of ache.

In it, though, Wolterstorff observes, as my friend pointed out, that our grief “will never end because the absence will always be there in this life. Only death can stop the pain of death.” She wept because she recognized the truth of his words. Indeed, she said, “it was a relief to have that knowledge.”

My own list has turned out quite different. And it seems that, without consciously constructing one, it coalesced not in the past two months since my father’s death but rather over the past several years. My family lost my father gradually—“by inches,” we’d say—over 10 or more years to Parkinson’s. I think that I began reading about grief and fathers as my father started to recede further and further away from me, when the hope of being known by him slipped further into the recesses of the past.

It began with recommendations from Steve Garber. He told me that the best two books he ever read about fatherhood were The Chosen by Chaim Potok and (in spite of its earnest title) How to Really Love Your Child by D. Ross Campbell. Both proved exactly on point, and more than the other books pictured here, they speak as directly into the challenges of being a father as they do about the difficulties and frustrations of fatherly love.

I included Friday Night Lights not for the book but for the TV program that it inspired. My friend also deserves the credit for turning me onto the series for its positive portrayal of a marriage, the central unfolding story of the relationship between football coach Eric Taylor and his wife, Tammy. The coach is also an exemplary, if reticent, father figure, and the show never shied away from difficult questions about father-son relationships and grief. To it (and its writers, principally Peter Berg and Jason Katims), I owe perhaps the greatest debt for showing me intimations of our Heavenly Father.

Lastly, I’ll briefly note that the HBO production of Margaret Edson’s Wit has done more than perhaps any other drama to knit together my faith in Christ, my love of poetry, and my hope in a “life after life after death.” (I have recently written about Wit here.)

Thank you, Anika, for reminding me how great books—and great television—do important work in our hearts and the ways they point to ultimate things, greater than ourselves and our loss.

2 thoughts on “Reading Through Grief”